February 17, Best Bets of the Day – Seria A Predictions 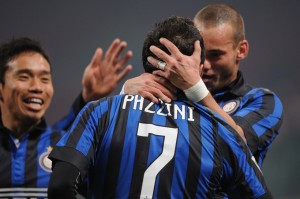 Again, BetOnWins.com is about to provide you the best sports bets for today – February 17th, 2012, with our football predictions from the Italian Seria A. Both Inter and Napoli have had their fixtures pushed back (to Friday), as Liga Calcio tries to give their teams as much time as possible to recover and get prepared for their crucial Champions League matches next week. As you are probably aware of, Seria A is one of our favorite leagues where we enjoy some of our highest accuracy ratings and we will keep that trend with some more winners for you.

After enjoying a spell of seven straight wins under Ranieri, Inter have taken not one but several steps back as they have failed to win in their last five matches. Napoli ended that positive run as they eliminated them from the Coppa. That was followed by an away defeat at Lecce, then the spectacular 4:4 draw at the snow in Milano against Palermo. The next match was a heavy blow with Roma trashing them 4:0. Then, when fans thought things could not get any worse, Inter slumped to a stunning 0:1 loss to newly promoted Novara at the Meazza.

So it’s been quite a while since Inter enjoyed a win, and the pressure on Ranieri is mounting up, although there are no evident replacements for him. Curva Nord already made their voice heard as they chanted during the Novara game that they don’t want Capello. Villas Boas is another candidate should he exit Chelsea this summer. Either way, Inter know this game is an absolute must-win for them, in order to get back in the fight for the third spot – the last one giving access to Champions League football next season. That would be a major factor in this Inter v Bologna prediction, as this is basically a do-or-die game for the Nerazzurri. Their win here is a certainty according to our most accurate football predictions for today. 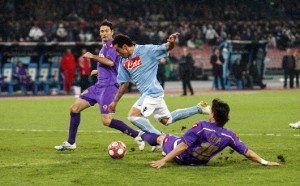 Our next Seria A prediction is on the match between Fiorentina and Napoli on February 17th, 2012. Napoli’s coach stated the ever-lasting cliche that it’s only the next match that counts, and his players will not be making any plans in advance for the upcoming tie with Chelsea. Mazzari confirmed he will play Cavani and Hamsik. However, up against them will be a dangerous Fiorentina side that has collected the majority of the points at home. It should be a well balanced match, in which we predict that both sides will score. These two Seria A predictions are our best bets for the day.

February 17, Best Bets of the Day – Seria A Predictions added by betonwins on 02/17/12
View all posts by betonwins →