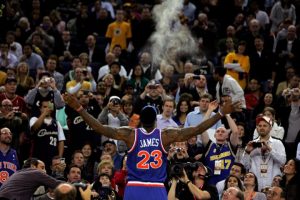 Game 6 was a case of Excellence against a Facade. The Cavs played the role of the facade this whole year as they posted the best regular season record for a second year in a row, and everyone was tipping them as the main Championship Contenders, including the bookies. The Celtics proved to be the much better team even though they were rated as underdogs. But truth is a single man can’t win over an entire team, even if he is called LeBron James. And on top of all that, “King” James had another bad game and failed to live up to all his hype. So the other conclusion is that Jame is not so great after all. He was just 7/21 from the floor and had 9 turnovers! His shot was not there and his leap was missing. His supporting cast also failed once again, but it happened against a better team. A real team. The Celtics were the classier side, more determined to win right from the start and in a way better mind state and mentality. Celtics were hitting all their clutch shots, lead by Rondo and Garnet who had 22 points. Even Rasheed Wallas chipped in a couple of threes.

LeBron didn’t have any lift going to the basket, he didn’t have any rhythm in that game,  perhaps he has fatigue, doesn’t matter. His season is over and his Cavs career is probably over too. Where to now for LeBron? Should he stay or should he go? What do you think?

He wasn’t aggressive as he had to tonight, there was too much dribbling, too much winding up. This is the main difference with him and Kobe. Kobe takes better decisions much faster and is much more efficient. “King” James had 9 turnovers! It was 4 against 1 just like in the picture we had in our prediction for the game, although we expected more from the Cavs and James. But LeBron James is a very loyal guy which is why a lot people think he is going to stay.

But it’s highly likely for him to end up New Jersey because of their new Russian billionaire owner, they will also have 1st pick in the draft, have the necessary salary cap, and so on. So the Nets got a big market, a lot of free agent money, they already have a lot of pieces in place – Devin Harris, Brook Lopez. They are certainly not a 12-win team, they are more talented than that. It probably sounds crazy for James to go to Nets but it will be a building process all over again, even if he stays in Cleveland. And don’t forget the Jay-z connection.

Another big possibility is LeBron going to Chicago, because the Bulls have a great nucleus of young players (Rose, Deng, Noah), they are a great basketball marketing city, the Jordan connection in terms of NBA imagery.