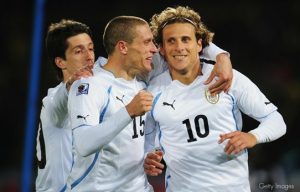 Most people would say a Draw if you ask them for their Mexico v Uruguay Prediction, but will that be the case?The 2010 World Cup is getting more intense and decisive with each day now and today marks the start of the 3rd and final Group-stage round. Both matches in each group will be played simultaneously so that there aren’t any possibilities for fixed games.

All eyes will be on the South Americans which are expected to arrange a draw which will have both nations qualifying for the knockouts regardess of how the other game between South Africa and France ends. That’s why the main Mexico v Uruguay prediction is for a draw.

Draw is also the Mexico v Uruguay Prediction for all the online sports betting companies as the odds for that are just 1,80! Wow! Normally, the odds for a draw are at about 3,20 (that’s of course all in decimals) and yet here we see it as low as 1,80.

Uruguay have been one of the most impressive sides in the South Africa so far with Diego Forland carrying the goal-scoring burden. His brace against South Africa came at just the right time to get his confidence and mood going. Now, one of our most accurate predictions for Mexico vs Uruguay is for Diego Forlan To Score At Any Time @ 2,87! Forland is shaping up as one of the contenders for goalscorer for the competition so it’s a good idea to back him up against the Aztecs. 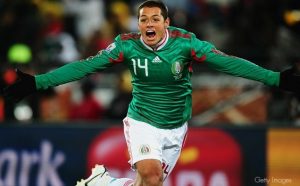 Hernandes, the Mexican youngster who was just recently signed  by Manchester United, made his mark in the World Cup by scoring the decisive second goal in Mexico’s last round win against France with the impressive 3-0 result. The odds for Hernandes Scoring At Any Time are 3,50!

The big betting Value in this match is to go for a win for either team. When it comes to football predictions, you have to go after the value bets –  bets which are associated with a high odd combined with a very high probability rate. And in the case of  Mexico v Uruguay, the value is on either team to win. Mexico are rated at 3,75 while the Uruguayans are at 4,50!

A win for Uruguay will see them top Group A and avoid Argentina who are about to win Group B. That should certainly serve as huge motivation for Tabarez and his men. The Aztecs on the other hand will be super motivated and try to do everything possible to go through by building up on their excellent performance against the flops from France. So it’s a really though game to call.

Mexico v Uruguay Prediction: We sense this game won’t be a draw so that South Africa can get a chance of going through. That’s why it’s good to bet on a win for either team as the odds are great. On the other hand, perhaps the best bet is on Forlan Any Time.