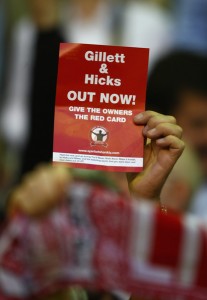 The Prayers of Liverpool fans have been answered as Hicks and Gillet are now officially confirmed to leave the club this summer. This Friday, 16th of April, Liverpool FC announced that Martin Broughton is now the Chairman taking immediate effect. The main task in front of the new Chairman would be to oversee the sale process launched by current owners, George Gillett Jr and Thomas Hicks.

The Club has already made contact with Barclays Capital to get advising on the sale process. Good news is that the Club has the full backing up by its existing lenders and has all the necessary financing in place to support its existing operations.

Here are some quite positive financial numbers from the Hicks & Gillet mini-era, released in a statement on the official Liverpool FC website:

– The Club’s revenues have increased by 55%;

– Commercial revenues have increased by 83%;

– Operating profit (before player trading and exceptionals) has increased by 60%.

Hicks and Gillet had the following to say on the move: “Owning Liverpool Football Club over these past three years has been a rewarding and exciting experience for us and our families. Having grown the Club this far we have now decided together to look to sell the Club to owners committed to take the Club through its next level of growth and development.”

The new Chairman is Martin Broughton who is an already working in the same position for British Airways. But why was getting a new Chairman really necessary for selling the club. Well, the answer is given by the fact that the Club’s main lender, the Royal Bank of Scotland, actually insisted on appointing an idependent chairman.

Martin Broughton had the following to say in front of The Guardian: “I will run this sale process in the right way, for the benefit of the club and its fans. Liverpool is one of the world’s greatest clubs and my aim is to try and ensure that we find new owners who are able to build on the club’s recent improved financial performance in order to help deliver sporting success.”

Quite naturally, the question that’s on people’s minds right now is “Where to now for Liverpool?” The Americans had an extremely controversial period of running the club despite the stated improvements in the financial numbers. The fans wanted them out for quite a long time now as it always seemed that the couple didn’t have that serious intentions on the Club and wasn’t planning on turning it into a valuable asset for the future.

Liverpool need a serious cash injection to finance that build of a new stadium and it looks like they got it last night. Gillett met at Anfield with the Saudi tycoon Prince Faisal bin Adbullah al Saud and it’s more than likely that an agreement was made. Since then, of course Pricnce Faisal went on and denied such claims. Another highly possible scenarion is for the Syrian businessman Yahya Kirdi to take over as according to some reports he is already in advanced stages of negotiations with Liverpool.

We will see what happens in the summer but what’s certain is that Gillett and Hicks are finally out so LFC fans have something to cheer about. Could the Glazers be the next to go?