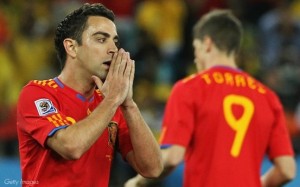 Spain takes on Honduras in the last of Monday’s three World Cup games. The Iberians will be desperate to get a win in this one after losing to Switzerland 0-1 in their opening fixture. Spain were tipped by most betting experts as the favorites to win the tournament but things don’t look so bright for them after their disastrous start.

The whole Spanish country will watch this game hoping their footballing heroes show their real faces and start turning this around. 3 points from this match against the underdog Honduras side are an absolute must for Vicente Del Bosque and his players.

Fernando Torres should be available for selection right from the start and one of our Spain v Honduras Predictions is for him to play from the very first minute and actually score a goal in this match. Torres will be eager to find the back of the net after an unconvincing display in the game against the Swiss where he came on as a sub. The starting role is much more suitable to him and it will put him in a better mind set. Torres to Score At Any Time is available at 2,00 by most online bookmakers, bwin in particular.

The Spaniards will be looking to take an early lead and calm things down thus the most accurate Spain v Honduras Prediction is for Spain to lead at the break and eventually win the match. This bet is available at 1,55 and even though it might not seem like much, it’s definitely worthwhile if you combine with a bet from another event.

Carles Puyol said he and his teammates will treat this game against Honduras as a Final: “The team is really enthusiastic and really keen after the incident the other day and we are looking forward to the next match,” Puyol told Press Association Sport. “It is an extremely important match – like a final. We know we have to come out winning. To do that we have to be very respectful of our opponent and we hope to have a good match.”

Considering how determined the Spaniards will be to win this encounter, another really good Spain v Honduras Prediction is for 2008 Euro Champs to win with over 1 goal difference. This bet is given by bwin and all online bookies as Spain to Win -1,5 and the odds are 1,55!

Spain v Honduras Prediction: Bet On Spain to beat Honduras with more than one goal! They should be able to take the lead in the first half and keep on adding up to it until the final whistle and put the Swiss nightmare behind them. Fernando Torres to Score At Any Time is also a valuable bet.