Torres Out For Six Weeks 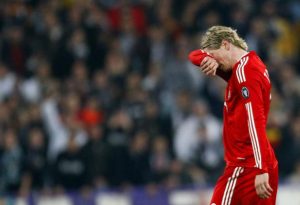 Liverpool’s goal scoring machine Fernando Torres is out yet again with another serious injury. The Spaniard has been troubled by injuries all season long and according to doctors this latest setback means that his club season is practically over.

Here is the official statement released by Liverpool FC at their club website:”ernando saw a specialist in Spain earlier today and it was decided that he would need surgery on a torn cartilage in his right knee. This will be carried out later tonight (19th of April).  We cannot comment ahead of the operation, but as a guide, the usual rehabilitation period for this type of procedure is around six weeks.”

The forward had been playing with some pain in the knee for quite some time now, but the medical staff was hoping the problem wouldn’t need surgical interventions. However, that turn out not to be the case as El Nino would indeed need surgery on a torn cartilage in his right knee.

Usually the rehabilitation period for this type of injury is up to six weeks which puts Torres’s World Cup hopes at jeopardy as well. What’s interesting to note is that he will surely miss Liverpool’s semifinal ties in Europa League against Atletico Madrid, the club that sold him to Liverpool back in 2007.