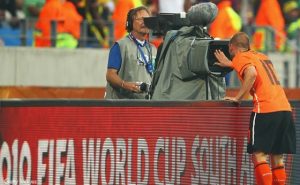 Holland’s play maker was quite rightfully credited by FIFA for the first goal against Brazil in the Dutch’s 2-1 quarter-final victory. Wesley took a free kick in the 53rd minute which was slightly deflected by Felipe Melo from Brazil but the ball didn’t change its direction significantly as it went into Julio Cesar’s net. During the match, the goals was labeled as an “own goal” by Melo, but video reviews by FIFA made after the game ruled otherwise.

And it’s indeed the right call to make, because as we pointed out already, the ball was perfectly directed by Sneijder and it was practically bound to go in. According to this official decision, Wesley Sneijder was the scorer of both goals in the match so if you had a bet on Sneijder to score the 2nd goal in the game, you should check with your sports betting company to get your winnings.

Here is the official explanation given by FIFA: “Shots which are on target (i.e. goal bound) and come off a defender, or shots which rebound from the goal-frame and bounce-off a defender or goalkeeper may be considered as an own goal, but in the instance of the Netherlands opening goal against Brazil, the TSG have decided to credit the goal to the attacking player.”

Wesley Sneijder now has 4 goals in this Mondial, which is an incredible number for a midfielder proving that the Dutch maestro is one of the best attacking midfielders in the world right now.

One Response to "Wesley Sneijder Credited With 1st Goal against Brazil"