Who Is Going To Be The Leading Scorer in South Africa? 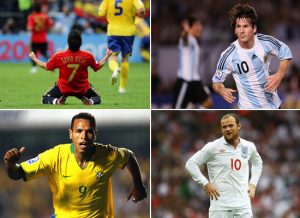 We continue our World Cup 2010 Predictions with a betting pick on who is going to be the leading scorer of the tournament. From the 11th of June till the 11th of July, the whole planet will be football and as we all know, goals are what make the difference between winning and losing, success and failure. At the end of each FIFA World Cup, several awards are given to players who have distinguished from the others, in various aspects of the game. The most important award of them all is the Golden Boot trophy which is given to the leading scorer of the tournament.

Bookies allow you to have a bet on just about anything these days, and when it comes to the World Cup 2010 bets, the one for the leading scorer is indeed quite valuable and could potentially bring you loads of cash. The odds for all the players go over 9,00 so if you bet multiply your stake by as much as 10 times, even 20. This is because we are talking about an outright type of bet that will be paid at the end of the tournament, but that shouldn’t bother you if you are making money.

The best betting tip in the case of leading scorer pick is to wager your money on a player that’s then main attacking force of a team you expect to go far in the tournament and plays the maximum number of games, which in the case of World Cup is 7. So the idea is to bet on a player whose team will reach the Semis, in that way you guarantee yourself the highest chance of winning cause even if his team loses the Semi they will still play another game, the one for 3rd or 4th place.

So who are those 4 teams with best odds of getting through to the Semi Finals? One of our most accurate World Cup 2010 Predictions is that these countries will be Argentina, Brazil, England and Spain. And who are the main players in attack for these teams? Leo Messi, Luis Fabiano, Wayne Rooney and David Villa. Let’s take a look at each one of them.

Of course, Spain are one of the main favorites to go all the way and win the trophy and David Villa is their main man in attack. Yes, we shouldn’t underestimate Fernando Torres, but right now it seems Villa is in better form plus the fact that he completed the move to Barca means he will settled and fired up.

There is not much to say about Leo Messi. He is the best player in the world right now, probably about to become the greatest of all time and winning the World Cup with Argentina and becoming the goalscorer at the same time would be just what he needs and deserves to go down in history as the best.

England can make a big progress in this tournament and should that be the case, Wayne Rooney has to explode with goals. That’s why it’s a great idea to back them up with a bet on Rooney to become the goalscorer. He was in top form for Manchester United all season long and if continues playing that way he is certainly more than capable of doing it.

El Fabinho leads the attack of none other than Brazil so he certainly has good chances of winning the Golden Boot trophy. Basically, anyone who wears the number 9 for Brazil can become the goalscorer and it’s no different for Fabiano. He is the classical striker that might not have an incredible dribble but is certainly a real goal predator.